I started by using a dripping font which I downloaded from a font website, it is called ‘pieces nfi’ and is from fontspace.com, I found the font by typing in to Google ‘dripping font’ and found this one before downloading it and using it in the colour yellow. My initial idea was to have chocolate dripping however I did not think I could make this look exciting so I decided to change it to cheese which could be dripping down, as this relates more to Pizza, I also added small white points to make it look more 3D. I wanted to create the dripping cheese style as it is quite unique and represents cheese well, I also think it is a good way to fit the brief as it is kind of a crazy style due to the dripping rather than just plain text. It was hard to choose which colour I wanted the text to be, I ended up choosing yellow as not only is it a bright colour but it represents cheese which would go well with the pizza illustration rather than red which may be mistaken for blood and look a bit scary. I think overall the font works really successfully and is one of my favourite features in the magazine spread.

I created a basic pizza using the image in the screenshot and created the shape of the pizza by using the pen tool, I click and dragged in areas where I wanted there to be a curve, this created an anchor point where I could make the bend more extreme or more straight. Then I filled the shape with the beige colour before using the paintbrush tool to create the lighter middle part as though the slice had been cut from a whole pizza and added details such as darker spots using the paintbrush tool. I then went on to paint red on top of the base before adding a yellow layer to be the cheese. I used the burn tool to create darker patches to make it look a bit more detailed and give the cheese a bit more excitement. I wanted it to look quite rough and cartoony as this is what the style is in my research magazine spread number 1. By looking at the image I was using to make the pizza slice it obviously looks very different from the illustration I created, and this was my goal as it takes influence from my research however I only really used the shape of the image and nothing else which was good because I felt I had the freedom to create something that was more my own than a trace of another image. I like the way the pizza slice came out in the end and I think it is effective as it is a cartoony version of a pizza slice and compliments the cartoony font title. What I think is less successful it the cheese and while it has the detail of the darker shades I think it could use some individual strands of grated cheese or some mozzarella perhaps, this would make it even more interesting and add detail to the piece which I think is important as the magazine spread will be quite big.

I made this using the paintbrush tool, and applying the dissolve blending mode on top of this, I wanted to use the dissolve blending mode as this breaks up the colour and makes tiny dots, similar to the texture in salami, I think this works well in this illustration. Another tool I used was the burn tool to make some areas darker, again to add texture and detail to the salami, the lighter spots were made using the brush tool and look like the fat spots in real pepperoni, and I think it looks effective as it is very textured and easy to recognise as salami, especially next to the pizza slice image. To improve it I would add a few more darker spots and perhaps blend out the colours however this may look odd against the pizza slice as this is very cartoony and adding more detail to the pepperoni may make it look very realistic. To move forward in my illustration I would like to make one or two other pizza toppings and place them around the pizza as if they have exploded off the cheese, this fits with the crazy idea of the brief and I think it will look interesting.

I also used the paintbrush tool for the mushroom and the blur tool as I did not want it to be too detailed. At the moment the piece does not fit the brief as I have not assembled the images together, as the images themselves are not crazy enough on their own. I think in terms of quality all of the illustrations in this piece could be improved as they are all very cartoony however I do not think I have the time frame to make a very realistic piece as well as two others. I will add this item to the overall piece and have it flying off the pizza slice to emphasise the craziness of the magazine spread.

I arranged the illustrations around the pizza slice as if they were exploding from the pizza, this fits the brief in the ‘crazy’ element and insures that the piece looks more exciting than if they were on the pizza. I like the way this looks and I think it fits the brief well due to the food flying around the typography and pizza slice images are my favourites as I think they look really effective and fit with the brief. I like the colour contrast between the red and the yellow and the bright colours stand out and are very noticeable. Overall, I am pleased with the outcome as it is exciting and fits the brief however there are things that could be improved if I had a larger time-frame, for example there cold be more detail on the cheese on the pizza and a more developed background. I do not like the black lines next to the pizza toppings and I think they should a bit thinner as they look kind of out of place as there is not really a thick stroke on anything other than the title, and I wanted this to stand out over the illustration.

To create the background I copy and pasted the word ‘PIZZA’ into a column style then duplicated this multiple times, I wanted to create a kind of chaotic background to add to the crazy effect and ensure that this is what the magazine conveys. When I created the background and placed it on the page with everything else the title did not seem to stand out enough and to make it stand out more I double clicked on the layer it was on and added a thick white stroke, this created the white border around the edge of the type and really creates a focal point. 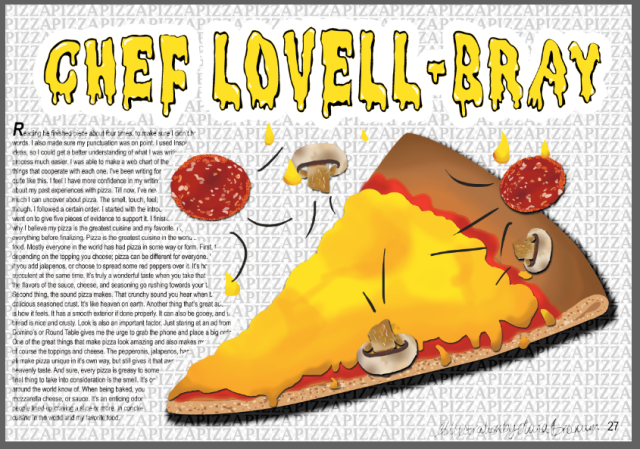